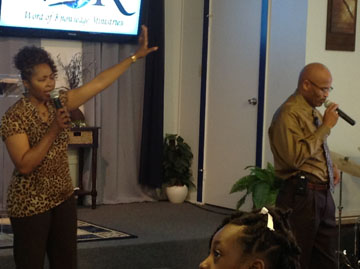 Pastor Ron Watlington was called to the ministry in 1994. He and Pastor Janice Watlington served faithfully under another ministry in Heidelberg, Germany for five years. Due to military Permanent Change of Station Orders, they were directed to Bamberg, Germany to help another Pastor establish a Church service in the Bamberg community.

After teaching God’s Word for several months at the service, God spoke to the Pastors again about leaving the Bamberg area and moving to the Wurzburg, Germany community to start Word of Knowledge Ministries.

After the Pastors discussed several names for the Church, they decided to pray and ask God to give them a name. While driving from Heidelberg, Germany a short time later, Pastor Watlington was instructed by God to name the Church “Word of Knowledge Ministries.” The name was given in reference to Hosea 4:6, “My people are destroyed for lack of knowledge.”

The Pastors were instructed to teach the Word of God with simplicity and understanding so people would get saved, and learn that they can live a victorious Christian life right here on earth. There were approximately eight people who attended the first service. The Church began to grow as the Word of God increased.

God later spoke to the Pastor about reestablishing Word of Knowledge Ministries in Killeen, Texas. Word of Knowledge held their first service in Killeen, Texas on July 11, 2010. The Pastors continue to teach the message to the people that they do not have to wait to get to heaven to be victorious. God wants us to be victorious right here on earth today!

Pastor Ron Watlington is an ordained minister under www.fcf.org.